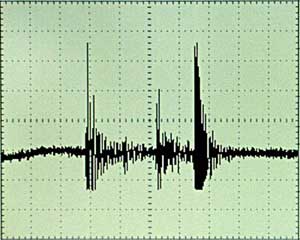 MicroSet 3 and the MicroSet watch timers allow you to measure the amplitude of vibration of a watch balance wheel to a high degree of accuracy with the optional Balance Wheel Amplitude feature.

A watch tick is composed of at least three main sources of sound (there are two additional sounds of lesser importance):

The amplitude of a balance wheel can be calculated from the geometry of the escapement and the relationship of sounds within the tick. Specifically, the interval of time between the unlocking and the drop is used with the beat time and lift angle to calculate a value for the amplitude.

The image at the right is taken from an oscilloscope set up to capture the complex sound of a single watch tick. The three sound bursts can be clearly seen.

We are able to add an “oscilloscope mode” to MicroSet with which to analyze a watch tick in detail. This feature works in conjunction with the Windows interface software version 3. The image below shows the new function at work. The three primary components of a watch tick are clearly seen. The computer has analyzed the parameters and tells us that the amplitude of the balance wheel in this watch is 207 degrees.

Sometimes a watch is noisy, the amplitude is jumpy, or the tick is so quiet that it’s hard to distinguish the important sounds from the background noise. The window below shows such a watch. The “drop” is poorly defined and the “impulse” is too strong. MicroSet is unable to calculate the amplitude of this tick.

The window below shows the same watch a few seconds later. The component sounds have been clarified and MicroSet can calculate the amplitude at 314 degrees. The difference is made possible by the use of an “Average” function. When the “Average” button is selected, MicroSet will begin to calculate a running average of many ticks. The sounds of the ecapement are the same in every tick, so these parts of the sound get magnified. The noise is different in each tick, so these sounds get reduced. In just a few ticks the “real” sounds climb out of the background noise and MicroSet can measure the watch.

The “Balance Wheel Amplitude” circuitry can be added to a timer if you request it for an additonal charge.