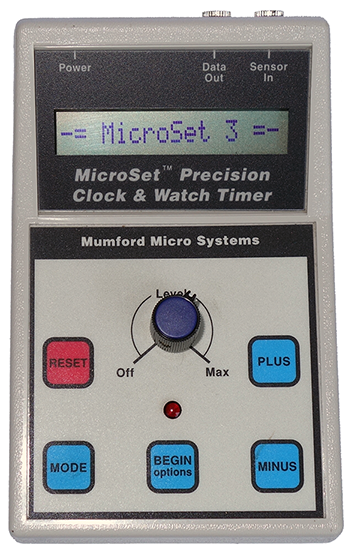 MicroSet is an electronic timing device which measures mechanical clocks and watches with unprecedented precision. It can measure beat times to within a millionth of a second and resolve rate errors as small as one second per week.

Since it was first introduced in 1997, MicroSet has revolutionized clock timing with many breakthrough features including an optical sensor, high precision measurements, powerful computer interface software, and additional diagnostic functions.

We have a MicroSet tailored specifically for watch timing too.

MicroSet 2
The original MicroSet was introduced in 1997 with several ground breaking features including unprecedented accuracy, an optical sensor to eliminate false readings from extraneous noise, and a powerful interface to personal computers. In addition to measuring rate and beat error, MicroSet 2 adds two functions that have never before been offered in a clock timing tool. The Count Mode will help you find the correct rate of any running pendulum clock. The Strike Mode will record the pattern of strikes over many hours to find intermittent problems. There are also several optional features that can be added to MicroSet 2.

MicroSet Watch Timer
We have configured a MicroSet timer to be used by people who work with watches and not clocks. The MicroSet Watch Timer does not include the usual acoustic and optical sensors that are used with clocks. Instead, you select one of the watch sensors. Also, the Count Mode and Strike Mode, used only with clocks, are not included. In their place, the Watch Timer is able to automatically recognize the common watch rates for timing. The price varies with type of sensor used.