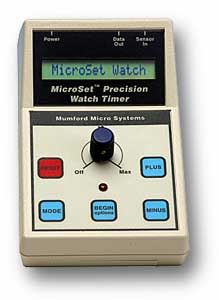 There are two models of MicroSet watch timer: the standard MicroSet Watch Timer and the MicroSet Watch Timer Pro. They generally look the same and have generally the same internal circuitry. The Pro model includes some of the optional features available in the standard model: the built-in beat amplifier and balance wheel amplitude. It also comes with an enhanced version of the Windows Interface Software that (among other improvements) allows the computer to control the timer. This means you can reconfigure the timer for different types of measurements just by clicking on the computer screen. The Pro software also has a built-in Help system that will take you through the measurement of a watch step-by-step.

You can upgrade a standard Watch Timer to the Pro model.

If you occasionally work with clocks you can get a clock sensor for a MicroSet Watch Timer.

Both timers have the following standard operating modes. Click on one to get more detail.

Optional Features
The following extra cost options can be added to either Watch Timer. They can be incorporated when you order your MicroSet Watch Timer, or added later. Prices for the options can be found on the MicroSet order entry page.