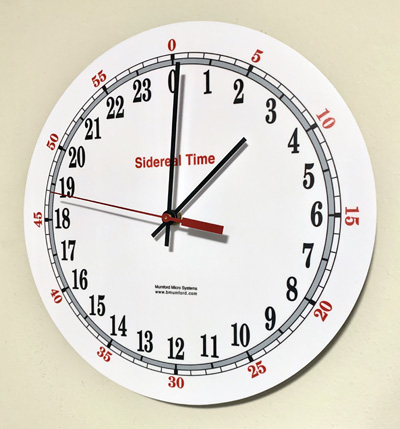 This clock keeps sidereal time. It has a 24 hour dial with a seconds hand and runs on one “AA” battery. The clock is hand-tuned to run within a few seconds per week of perfect sidereal time at room temperature.

Objects in the sky are located by their celestial position. This position is commonly given as “Right Ascension” and “Declination”. Every astronomical object has these coordinates. For example, The star Betelgeuse in the constellation Orion is at Right Ascension 5 hours 55 minutes and Declination 7 degrees 24 minutes. The Right Ascension is sidereal time. This allows you to know what celestial objects are “up” if you know what the local sidereal time is. Once you have a sidereal clock on your wall, if you see that it’s 5:55 local sidereal time, you know that Betelgeuse and Orion are on the meridian. If it’s 18:37 sidereal time, Vega and the constellation Lyra are on the meridian. If you’re familiar with celestial coordinates, a sidereal clock allows you to keep in touch with what’s going on in the sky even during the daytime when the stars cannot be seen.

Availability
I am currently not making sidereal clocks. But you can send an email if you are interested, and I’ll let you know when they are available again.

I’m also not making a Mars Clock that shows the time on Mars, and an astronomical Year Clock with one hand that takes a year to go around.