The Eureka Clock And How To Improve It 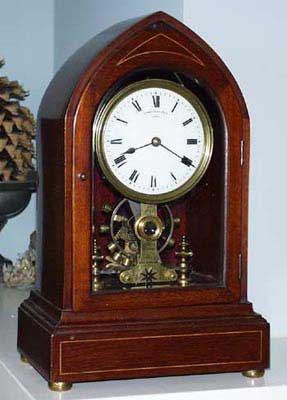 The Eureka clock was invented by Timothy Bernard Powers in New York just after the turn of the century. They were made by The Eureka Clock Company in London, England between 1908 and 1914. The Eureka is popular with clock collectors because the large moving balance wheel is interesting to watch. However, they do not seem to be great time keepers.

To look more closely at this issue, I connected a Eureka movement to a variable power supply and a MicroSet Precision Clock Timer. I arranged the MicroSet optical detector to trigger on the lever arm which drives the ratchet wheel. This causes the timer to trigger once per beat of the clock. The correct beat time of this clock is 1-1/3 seconds. The detector setup is shown below. 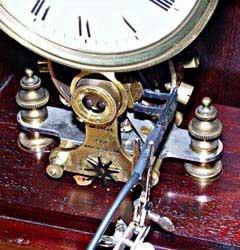 The first thing that becomes apparent is that the clock is very susceptible to battery voltage. This would have been a big problem in 1908, because there was no way to keep the battery voltage constant. The MicroSet graph printed below shows the response of this Eureka to a change in driving voltage from 1.5 to 1.9.

The first portion of the graph shows the clock running on 1.5 volts, the nominal correct voltage. The amplitude of oscillation at this time was rather small, about 190 degrees.

In the middle of the graph I raised the voltage to 1.9 volts. A dramatic speedup can be seen. This acceleration happens almost immediately. The amplitude of oscillation also increased dramatically, to approximately 340 degrees. The change in rate amounts to over an hour per day.

The last third of the graph show the rate returned to normal when I reduced the voltage to the original level.

In addition to this problem with voltage, the undisturbed rate of the Eureka does not seem to be very stable. The following graph shows the rate of this clock in the initial portion of the preceding example, when running at the normal operating voltage. I’ve magnified the view to show more detail. In this graph, the rate can be seen to change on the order of two minutes a day, over and over, throughout the 40 minute sample period. This is very erratic behavior for a clock. In addition to this general choppiness, there is a longer period variation as well. This cycle has a 60 minute period and is caused by the minute hand being raised up and down. A similar cycle with a 12 hour period can be traced to the hour hand.

The Eureka Governor
A remarkable improvement in Eureka clock accuracy

I have designed an electronic device that will go between a Eureka clock and the battery and cause the clock to be as accurate as a quartz clock. In fact, it causes the Eureka to synchronize to a quartz timebase. Purists may object to this, since the Eureka is no longer “keeping it’s own time”. But the Eureka Governor requires no alterations to the clock. It just replaces the simple battery with an “intelligent” battery. The clock looks exactly the same but is accurate to a couple of seconds per week.

The following graph shows an English Eureka as the Governor is installed. On the left side, the clock is running fast by many minutes per day. When the Governor is engaged, the clock slows down to the perfect rate of 1.333333 Seconds Per Beat.

CLICK HERE for more information on the Eureka Governor.