This page describes an electromechanical clock of original design, made in 1998

The clock is made to hang on a wall and stands 58″ tall. The case is made from quarter sawn oak that has been stained to resemble turn-of-the-century antique clocks. It has accents of figured maple in the top and back panels, and the door is glazed with beveled glass. At the bottom of the case is a small compartment for holding the electronics.

The Pendulum
The pendulum is fabricated from a 5/16″ diameter invar rod and a solid brass bob that’s 2″ in diameter and 6″ tall, weighing 5 pounds. The bob is currently simply supported by the rating nut, with no more complex temperature compensation. This produces daily fluctuations in rate of one to three parts per million. The pendulum is under-compensated, meaning that it slows down in warm weather.

This pendulum is a replacement for the original one, which had a lead-filled cylindrical bob on a wooden rod. It’s interesting to note that the new pendulum is three or four times more stable under temperature changes than the first one was.

The Dial
The dial is painted metal with a lacquered face. You will note the use of a separate seconds bit. The slave mechanism is made from the stepper motor out of a quartz clock which I drive with my own electronics. I deliver a pulse to the main motor and the seconds bit once on each passage of the pendulum. The hands can be adjusted (advanced or prevented from advancing) with push buttons on the electronics card. 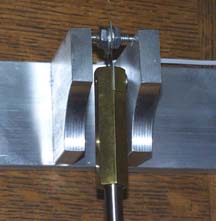 The Suspension
The top end of the suspension spring is clamped to a horizontal rod that rests in a notch cut into the top of the suspension bracket. The bracket is made from two inch by three-eigths inch aluminum bar stock. The spring is a standard model available from horological suppliers, which facilitates repairs or replacement. The pendulum can be removed from the clock by simply lifting it out, making it easy to experiment with different designs.

The Drive
The drive mechanism is a small coil of fine wire which I drive with a 5 volt pulse. The coil has a soft steel core, and it pulls against a matching steel pin at the bottom of the pendulum rod. The steel pin on the pendulum can be screwed up or down to adjust the magnetic gap. The coil is contained within a wooden block for cosmetic reasons. A small red LED in the front of this block illuminates every time a pulse is delivered to the coil, so you can monitor the action of the drive. 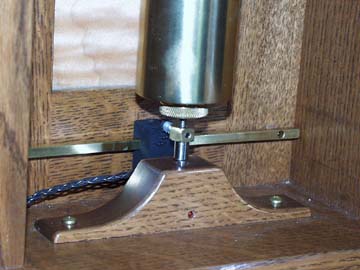 The sensor I’m currently using is a Hall effect device, chosen because it has lower current consumption than an optical detector and is immune to ambient light conditions. This is a non-critical choice, however, and optical sensors could be used instead. The coil housing and sensor can be seen below.

The Controller
The electronic controller is an original design, made for this clock. It uses a PIC microprocessor and has an LCD screen, three push buttons, and a variety of control inputs and outputs. It can be powered with batteries or an AC adaptor and has outputs to drive the impulse coil, the slave dial, and the MicroSet clock timer. Two inputs allow operation from one or two optical or Hall effect sensors. Note that the computer is not used to control the rate; that’s determined entirely by the tuned pendulum. 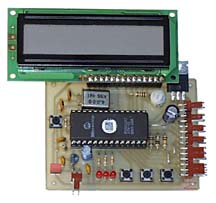 The microprocessor makes it easy to change the method of operation without making any physical changes to the clock. The program senses the left-to-right movement of the pendulum and drives the impulse coil for 40 milliseconds just before center of swing. This causes the pendulum to reach an equilibrium of about one and a half degrees of semi-arc. The operator can use the push buttons and LCD screen to customize these operating parameters. For example, it’s easy to change the duration of impulse from 40 milliseconds to any other duration, or change the frequency of impulse from once per period to as infrequently as you like. Such control will allow you to trim the rate without opening the case to adjust the weight tray. Software could also be written to support operation by maintaining constant velocity or by maintaining constant amplitude.

Performance
The performance of the clock is quite good. The MicroSet graph below shows an 81 day period. The clock started out exactly at rate, but speeded up after a week. It ran flat for about 30 days, and then returned near rate again. I have no idea what caused these changes. It does not seem to relate to the barometer. Note that there is a “wiggle” to the rate. It speeds up a little in cold air, and slows down again on warm afternoons. The wiggle is caused by these daily temperature fluctuations. The fluctuation amounts to one to three microseconds per beat over 24 hours.