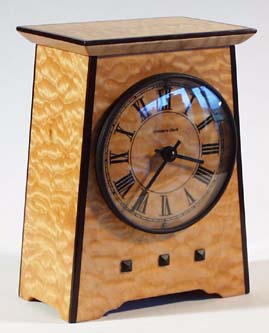 The Creature Clock is a handmade wooden clock in the “Arts and Crafts” style. It features a wooden face and hands. Inside the clock you will find a miniature, battery-operated microprocessor which monitors the movement of the clock hands and periodically reproduces the digitally recorded sounds of local wildlife. A light sensor allows the clock to make one set of sounds during the daytime, and another set after dark.

In one version, a variety of mockingbird calls are heard each daytime hour, with short songbird chirps on the quarter hour. After dark the clock plays the hoots of a great horned owl each hour, with crickets on the quarter hour. In another version, daytime hours are counted (like a chime clock) by crows and jays during the day, with frog croaks counting the hours after dark. A third version plays “Westminster Chimes” on a wooden flute. The digital recordings are reproduced at 22,000 samples per second and are played through a 4″ speaker. The Creature Clock sounds are vastly superior to the imported sound gimmicks you may have heard before, like the $20 “Singing Bird Clocks”. The Creature Clock will fool guests into thinking a bird is loose in the house. It’s not plastic, and it was made in America.

The Creature Clock was originally handmade by myself with the help of my wife Susan. This includes original field recordings of the creature sounds made with a parabolic microphone, processing the sound data on a computer with custom software for equalizing and data compression, writing microprocessor code to implement the clock functions, design of the circuitry which implements the microprocessor, layout of the circuit board, hand assembly of the electronic components, construction of the wooden cabinetry, and final finishing and fitting of the sensors and speaker.

The Creature Clock was available in a variety of woods and cabinet designs until I stopped making them in 2001. Shown here is a fancy model in Quilted Maple with Ebony bindings.

As Seen on Frazier!
You can see a Creature Clock on the TV show Frazier. In Frazier’s bedroom in 2000, on his headboard, was a cherry Creature Clock. Small pleasures….

Repairs
If you have an old Creature Clock and the hands no longer turn, you can send it to me for repair. For more information, send me an email.

See some different woods that are available